July 2, 1947
A rancher named Mac Brazel and others hear a loud crash  during the night near Corona, New   Mexico. Mac Brazel
July 3, 1947
Mac Brazel discovers some strange crash debris on the Foster  Ranch.
July 5, 1947
In the town of Corona Mac Brazel  hears about a $3000 reward for the debris of a crashed flying saucer.
July 6, 1947
Mac Brazel showed pieces of the wreckage to Chaves County  Sheriff George Wilcox. Wilcox called Roswell Army Air Field (AAF) and talked to  Major Jesse Marcel, the intelligence officer. Marcel drove to the sheriff's  office and inspected the wreckage. William Blanchard, Marcel's commanding  officer, ordered Marcel to get someone from the Counter Intelligence Corps, and  to proceed to the ranch with Brazel to collect as much of the wreckage as they  could.Soon after this, military police arrived at the sheriff's  office, collected the wreckage Brazel had left there, and delivered the  wreckage to Blanchard's office. The wreckage was then flown to Eighth Air Force  headquarters in Fort Worth, and  from there to Washington. Marcel  and Cavitt accompany Brazel back to his car to go to the debris field.The two deputies return to Sheriff Wilcox, having found an  area of blackened ground. Marcel and Cavitt stay at Brazel's ranch and examine  the large piece of debris stored in the shed July 7, 1947
Marcel and Cavitt collected wreckage from the crash site.  After filling Cavitt's vehicle with wreckage, Marcel told Cavitt to go on ahead  and he would collect more wreckage, and they would meet later back at Roswell  AAF. Marcel filled his vehicle with wreckage. On the way back to the airfield,  Marcel stopped off at home at around 1-2 AM to show his wife, Viaud, and son the  strange material he had found. Both his wife Viaud and son Jesse Jr. examine  the debris Jesse Sr. had brought home. Jesse Jr. remembers there were  pink/purple/lavender symbols along the centre sections of some of the small  metallic "I" beams in amongst the debris. July 8, 1947
Blanchard dictates a press release on the recovery of a  flying disk to PIO Walter Haut. Haut goes into town to deliver his press release to the radio stations and newspapers. His first is at station KGFL,  where he gives the release to Frank Joyce. Noon: The  information is put on the AP wire.

The only newspapers that carried the initial flying saucer  version of the
story were evening papers from the Midwest  to the West, including the Chicago
Daily News, the Los Angeles Herald Express,  the San Francisco Examiner, and the
Roswell Daily Record. The New York Times,  the Washington Post, and the Chicago
Tribune were morning papers and only  carried the cover-up story the next
morning.

No Details of Flying Disk Are Revealed


The intelligence office of the 509th Bombardment group at Roswell Army Air  Field announced at noon  today, that the field has come into possession of a  flying saucer.   According to information released by the department, over  authority of Maj. J. A. Marcel, intelligence officer, the disk was recovered on  a ranch in the
Roswell vicinity,  after an unidentified rancher had notified Sheriff Geo. Wilcox, here, that he  had found the instrument on his premises.  Major Marcel and a detail from his department went to the  ranch and recovered the disk, it was stated.  After the intelligence officer here had inspected the  instrument it was flown to higher headquarters. The intelligence office stated that no details of the  saucer's construction or its appearance had been revealed.

Mr. and Mrs. Dan Wilmot apparently were the only persons in Roswell  who seen what they thought was a flying disk.   They were sitting on their porch at 105 South Penn. last  Wednesday night at about ten o'clock when a large glowing object zoomed out of  the sky from the southeast, going in a northwesterly direction at a high rate  of speed. Wilmot called Mrs. Wilmot's attention to it and both ran  down into the yard to watch. It was in sight less then a minute, perhaps 40 or  50 seconds, Wilmot estimated.  Wilmot said that it appeared to him to be about 1,500 feet  high and going fast. He estimated between 400 and 500 miles per hour. In appearance it looked oval in shape like two inverted  saucers, faced mouth to mouth, or like two old type washbowls placed, together  in the same fashion. The entire body glowed as though light were showing  through from inside, though not like it would inside, though not like it would  be if a light were merely underneath. From where he stood Wilmot said that the object looked to be  about 5 feet in size, and making allowance for the distance it was from town he  figured that it must have been 15 to 20 feet in diameter, though this was just  a guess.  Wilmot said that he heard no sound but that Mrs. Wilmot said  she heard a swishing sound for a very short time. The object came into view from the southeast and disappeared  over the treetops in the general vicinity of six mile hill.

Wilmot, who is one of the most respected and reliable  citizens in town, kept the story to himself hoping that someone else would come  out and tell about having seen one, but finally today decided that he would go  ahead and tell about it. The announcement that the RAAF was in possession of  one came only a few minutes after he decided to release the details of what he  had seen.

That afternoon Marcel arrives in Fort    Worth and confers with Gen Ramey. Remnants of a  balloon are substituted for the real debris. A press conference is held in  Ramey's office. Photographs are taken of Marcel and Ramey with the balloon remnants.  Ramey issues a statement claiming that the Roswell  officers were fooled and that the material was from a weather balloon.

July 9, 1947
Officers from the base locate Brazel and return him to the  base for questioning.  Brazel is taken by the military to the office of the Roswell  Daily Record, where he gives a revised, sanitized version of the story.  Officers from the base visit newspaper and radio offices in town and recover  all copies of Haut's original press release. Brazel is also taken to radio  station KGFL, where he gives a revised version of his story.

The Roswell Daily Record runs a second story with the new official information.

The second story:
An examination by the army revealed last night that  mysterious objects found on a lonely New Mexico ranch was a harmless  high-altitude weather balloon - not a grounded flying disk.Excitement was high  until Brig. Gen. Roger M. Ramey, commander of the Eighth air forces with  headquarters here cleared up the mystery. The bundle of tinfoil, broken wood beams and rubber remnants  of a balloon were sent here yesterday by army air transport in the wake of  reports that it was a flying disk. But the general said the objects were the crushed remains of a ray wind target used to determine the direction and velocity of winds at high altitudes. Warrant Officer Irving Newton, forecaster at the army air forces weather station here said, "we use them because  they go much higher than the eye can see."
The weather balloon was found several days ago near the  center of New Mexico by Rancher  W. W. Brazel. He said he didn't think much about it until he went into Corona,  N. M., last Saturday and heard the flying disk reports. He returned to his  ranch, 85 miles northwest of Roswell,  and recovered the wreckage of the balloon, which he had placed under some  brush.

Then Brazel hurried back to Roswell,  where he reported his find to the sheriff's office. The sheriff called the Roswell  air field and Maj. Jesse A. Marcel, 509th bomb group intelligence officer was  assigned to the case.Col. William H. Blanchard, commanding officer of the bomb  group, reported the find to General Ramey and the object was flown immediately  to the army air field here. Ramey went on the air here last night to announce  the New Mexico discovery was not  a flying disk. Newton said that  when rigged up, the instrument "looks like a six-pointed star, is silvery  in appearance and rises in the air like a kite."

1978
Jesse Marcel came public stating that the weather balloon  announcement had
been a cover-up. See More

2007
Jesse Marcel Jr. writes a book detailing the real events  around the Roswell
incident as told  to him by his father. See More 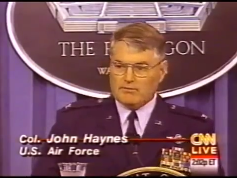 IT'S NO WONDER THAT TRUTH IS STRANGER THAN FICTION. FICTION HAS TO MAKE SENSE.
​
MARK TWAIN